Rajvi Patel, a student who was part of the ITSA workshops recently wrote us the most touching letter. This is really encouraging to see, and these sentiments from our students are what keeps us going:


"The entire experience of ITSA was mind blowing. The workshops were great; there were so many activities involved. We played interactive games, had discussions and the program helped increase our awareness about the socio-economic conditions of our country. I now know that we are the future leaders of our country and this workshop helped me realize it.The ITSA workshops are completely different from how we function at school.School is based on being disciplined, which makes it difficult to express ourselves the way we truly want to. We sit in front of a teacher lecturing while we try our best to stay awake in class,  Our dialogue in class, revolves around questions we have about our textbook material. ITSA made sure that we were truly using our mind and our own perspective to communicate. It was a platform to present ourselves with no restrictions or guidelines about how we SHOULD think. Not once during the workshops did I feel sad or left out; the atmosphere was cheerful and merry. It was Knowledge with fun and helped me truly grow!
In the ITSA workshops it didn't feel there was the teacher, as the disciplinarian, and the restof us were the students and receivers of information. We were all a big group of friends; that’s how it felt. This made for a healthy atmosphere and an open environment. The whole workshop taught me more than I had imagined to begin with; improving me as a thinker, being able to converse easily, a smile all the time, and so much more. My life has changed completely because of ITSA. I used to be a little shy and I couldn’t converse as easily before, but now, I have found my voice and more confident. It is because of ITSA that I believe in myself more than ever before and because of that self confidence, people believe in me.My favourite activities were the Boat activity because it involved a lot of discussion as we determined who we saved.  We were all expressing ourselves freely without thinking twice and without censoring ourselves. The video activity involving the discussion of a movie clip was also interesting as we discussed the different characters in detail. The activities I liked were all based on freely communicating our thoughts and perspectives without any boundaries to restrict us. I truly believe in the message of critical thinking that ITSA brings to us and I will try to spread its message and values wherever I go. I believe ITSA is truly awesome and deserves to be recognized. It helped me so much and I honestly think it can do wonders for so many others. Thank you ITSA!"


Edited by: Ashni Tripathi
Posted by ITSA team at 19:25 No comments:

An Article on ITSA in the Swarthmore Newspaper! 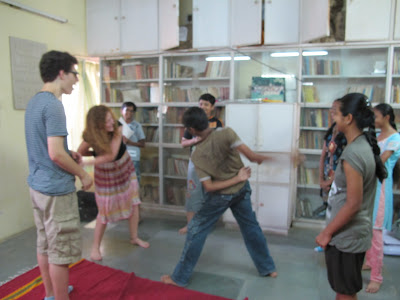 In a sweltering Indian classroom, as a student raises her hand with a question to understand the concept of photosynthesis, she is silenced by her teacher with instructions to memorize the definition on the blackboard. This authoritarian system has silenced questions and stamped out curiosity over the years as students follow the traditional system of rote memorization.
Riana Shah ’14 and Jwalin Patel may finally be able to break the silence. The duo co-founded the organization Independent Thought and Social Action (ITSA) about two years ago during their senior year of high school in an effort to reform and modernize the Indian educational system. As an internationally recognized educational reform organization, ITSA strives to provide Indian students with an outlet to discover themselves as thinkers and learners through a series of critical thinking, writing and discussion summer workshops.
Patel, now a student at the University College London, but previously a student of the Indian system who switched to an international educational high school, reflected, “As I went through the Cambridge system of education I realized there was a big divide between the two systems. The Indian system of education was not much of an education. It was just lots of information without a focus on developing critical or creative thinking skills.” Educated in India until the ninth grade, Shah’s frustration with pure academic regurgitation and minimal discussion reached its zenith as she realized the large disparity between her education at Bard High School Early College in New York and the traditional Indian system she was once a part of.
At Bard High School Early College, Shah was convinced that teachers need not be authoritarians who have the last word and that many answers come in shades of gray. “The realization that my solutions have just as much power to make an impact empowered me, so why shouldn’t students in our hometown of Ahmedabad have the opportunity to feel the same way?” she said. The motive behind ITSA’s construction was to reform a traditional school system based on rote memorization and passive learning to a dynamic one “geared toward producing thinkers and not solely technicians,” according to Patel.
Pooling their educational experiences together, they incorporated the methodology developed by the Institute for Writing & Thinking at Bard College into the ITSA curriculum to foster the thinking skills needed by the next generation of world leaders.
Initially after conception, ITSA implemented its curriculum in two schools. However, this past summer, ITSA has expanded its affiliation to over twelve schools in two different cities in the Indian state of Gujarat, Ahmedabad and Rajkot, with the help of a formal internship program, the Swarthmore Foundation Grant and a few Swatties who were dedicated to their vision.
Piecing together narratives from ITSA’s student-run blog, Emma King,ITSA intern and student at Bard, Shah’s alma mater, writes about ITSA’s identity workshops detailing how ITSA delves deep into the students’ minds to extricate all that they wish they could share. King noted that most of the kids initially described themselves as “obedient,” “polite” or, most frequently, “disciplined.” After the open-class discussions giving these students a nudge to identify qualities in themselves that weren’t held to societal standards, the children used words such as “creative,” “independent” and a “learner for learning’s sake” to describe the fabric of their being.
Each year ITSA workshops have a different theme based on various forms of social responsibility. Moving outside the confines of the classroom, they have begun a mentoring program to put the students’ passions into action.
ITSA team member, Meghna, who is studying engineering in college upon witnessing ITSA’s discussion forums, said that, “had something like ITSAbeen in my life when I was in high school, I might have chosen differently.”
Patel and Shah have brought awareness of the global education systems to campus, and are in the process of applying for the Lang Opportunity Scholarship worth $10,000 to fund these efforts. The exponential growth and impact that ITSA has had foreshadows what collaborators envision to be “the possibility for not only regional change, but also a national remodeling.”
ITSA has freed students from traditional educational constraints, so much so that a student exclaimed, “It’s like we actually have freedom of speech here!”