From ITSA House to Host Family: Experiencing a new side of Ahmedabad


After nearly 6 weeks of living together in the ITSA house, the thought of home-stays, of separating from the house and each other, was daunting for some of the seven ITSA interns. I was excited to be welcomed into someone else’s home and curious about my home-stay family, but I was also nervous to leave the area we all knew so much about—to say goodbye to the chai wallah on the corner who I buy tea from each morning and to the little street-food shop down the street where we buy midnight snacks, pav vada and veg puffs. More than anything, I was sad to not be living with the other interns, who by now are an adopted family. The thought of saying goodbye to our late night chats, our morning race for honey cornflakes, our movie nights and Bollywood music sharing sessions, the thought of moving out, was difficult.

Of course my being nervous didn’t change the fact that, when Saturday rolled around, the team was dropped off one by one at our respective host families. The wonderful Hilary, an India team member, explained to my family my spice requirements and the hours I’ll spend at the office, hugs abounded, and then I was alone with my host family.

It’s different living in someone else’s home, rather than your own, but also wonderful; the amazing home-cooked food (often way too much of it, the food is too good to refuse!), experiencing new fun things (like playing Quarm for the first time, which I was horrible at!), and, most of all, getting to be a part of a new family. In trying to integrate myself into my host family’s lives and world, I’ve learned so much about daily life in Ahmedabad that I hadn’t seen or known before.

My family, for example, is Jain. Growing up loosely somewhat Christian, sort-of Jewish, and mostly ethical humanist (check it out: http://en.wikipedia.org/wiki/Ethical_movement), I’ve never been seriously religious or spiritual. Spending time with them, whether it be in the morning when my host father does blessings around the house, in the evening when we go to temple, or just seeing how hard they work to protect each creature (Jains are pure veg and don’t kill any animal, including bugs), has allowed me to imagine a childhood experience much different from my own. One where I grew up surrounded by tangible religion, in as small a sense as incense burning in every store and as large as the Hindu prayers done in schools. One where I grew up believing wholly in that religion. One that is very different from the, often more cultural than religious, reform Judaism (and other religions) I grew up around in New York.

It has been really powerful for me to see and interact with the dynamics, on a mechanical and personal level, and values of my host family, not just in order to reflect on their positioning within Ahmedabad’s culture (i.e. how can this family teach me about what it’s like to grow up and live in Ahmedabad?), but also to examine my own upbringing. In speaking to my host family and host student about every topic under the sun, I’ve noticed different forms of cultural and familial indoctrination that I’ve been raised with, as well as freedoms (or lack of indoctrination) I’ve received as part of my upbringing.

So, even if moving out was scary, even if saying goodbye to my chai wallah and street food vendor was hard, and even if no longer living with the other interns is sad, my home-stay experience has been really meaningful so far (as well as fun!). Being truly immersed in the lives of a family, including sharing a room and going to school one day with my host student, as well as eating meals with my host family, has been challenging, thought-provoking, and, at the end of the day, a chance to learn about myself and others in a personally powerful way.
Posted by ITSA team at 06:24 No comments:

More than just a field trip 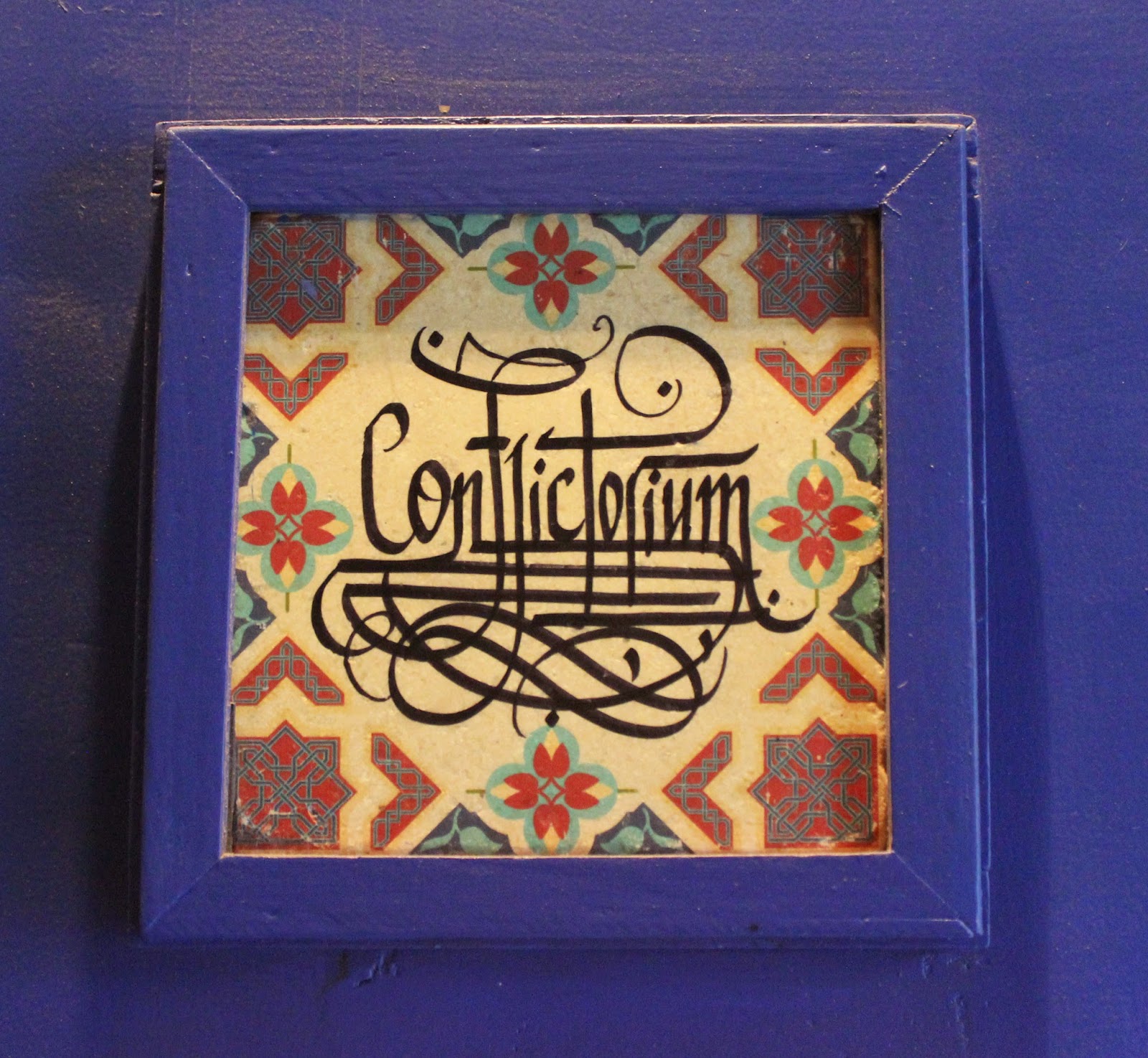 In our most recent workshop, we went on a field trip to the museum of conflict, better known as “The Conflictorium.”  Their description reads as:

“The Conflictorium, Museum of Conflict is a space that invites people to participate, co-create, experiment, collaborate, study, read and engage in a process of meaning making. So come here to showcase or appreciate up-and-coming talents-musical, intellectual, artistic-or use this free spaces for any other activity that relates to the city or makes us grow as people…”

And they do a stupendous job of that. The museum tackles the issue of conflict by situating it within the context of Gujarat and its histories of resistance and struggles for social change. In doing so, they aims to replace the culture of silence omnipresent in Gujarat, with “conversation and constructive reasoning.”

The exhibits were obviously informed by extensive historical knowledge and research. Yet, instead of merely reciting “historical facts,” many of exhibits presented this information through non-conventional artistic methods. Just presenting the information differently spurred so much dialogue amongst our field trip groups and forced us all to re-conceptualize matters that we had previously covered in our workshops. I can only speak for myself, but I feel as if the Conflictorium successfully in meaning some of its aims. 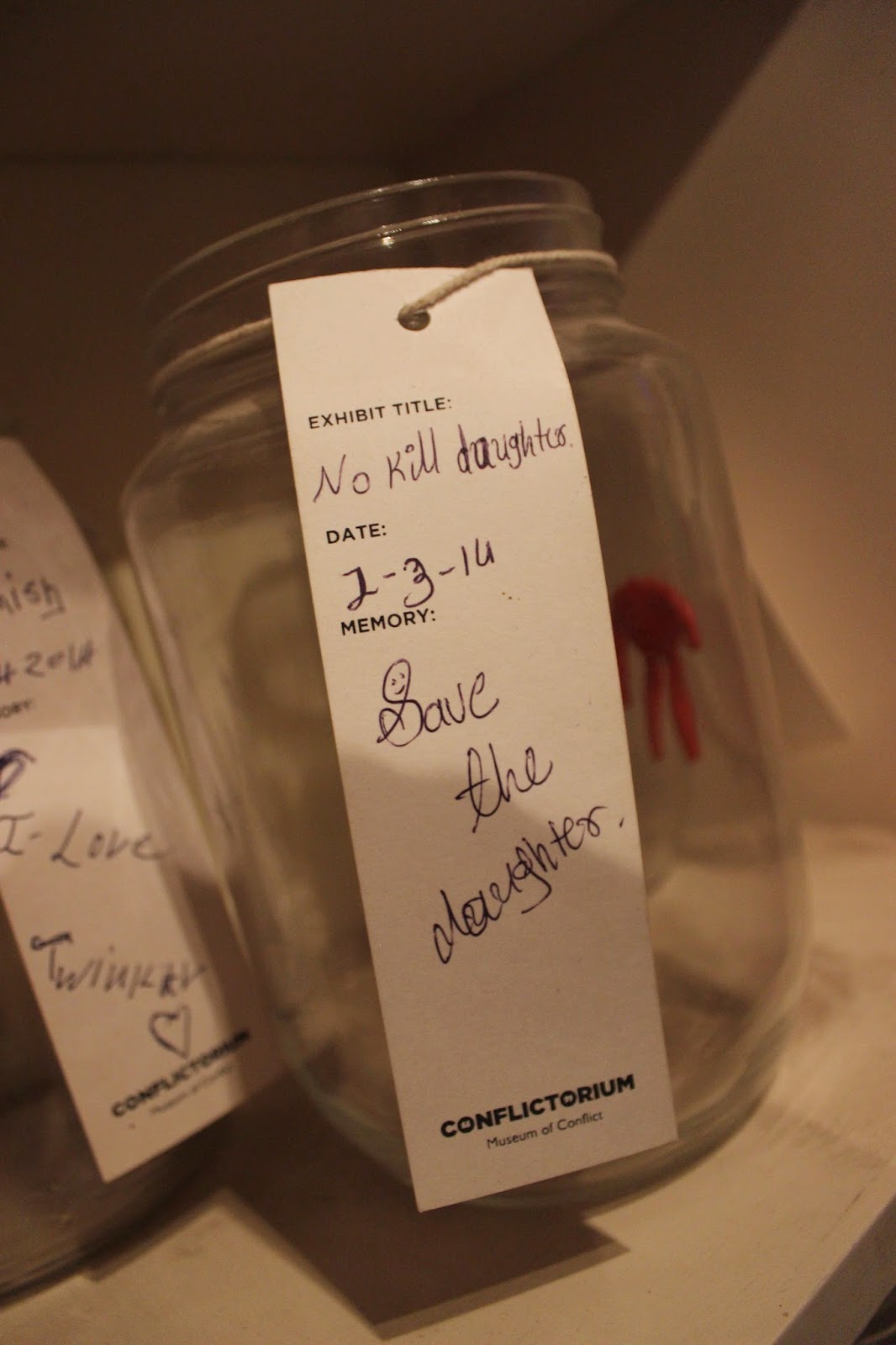 Managing the trip once we arrived was somewhat messy due to unforeseen changes in the exhibits. Despite this, these mix ups became a small detail in comparison to the fun we had throughout this trip. It was a wonderful change of pace from our typical workshop format and a more drastic change from the structure of classroom in participants’ schools. Of the students i spoke with, all of them expressed excitement and enthusiasm about our trip. In light of it all, I would gladly organize another trip to this museum. 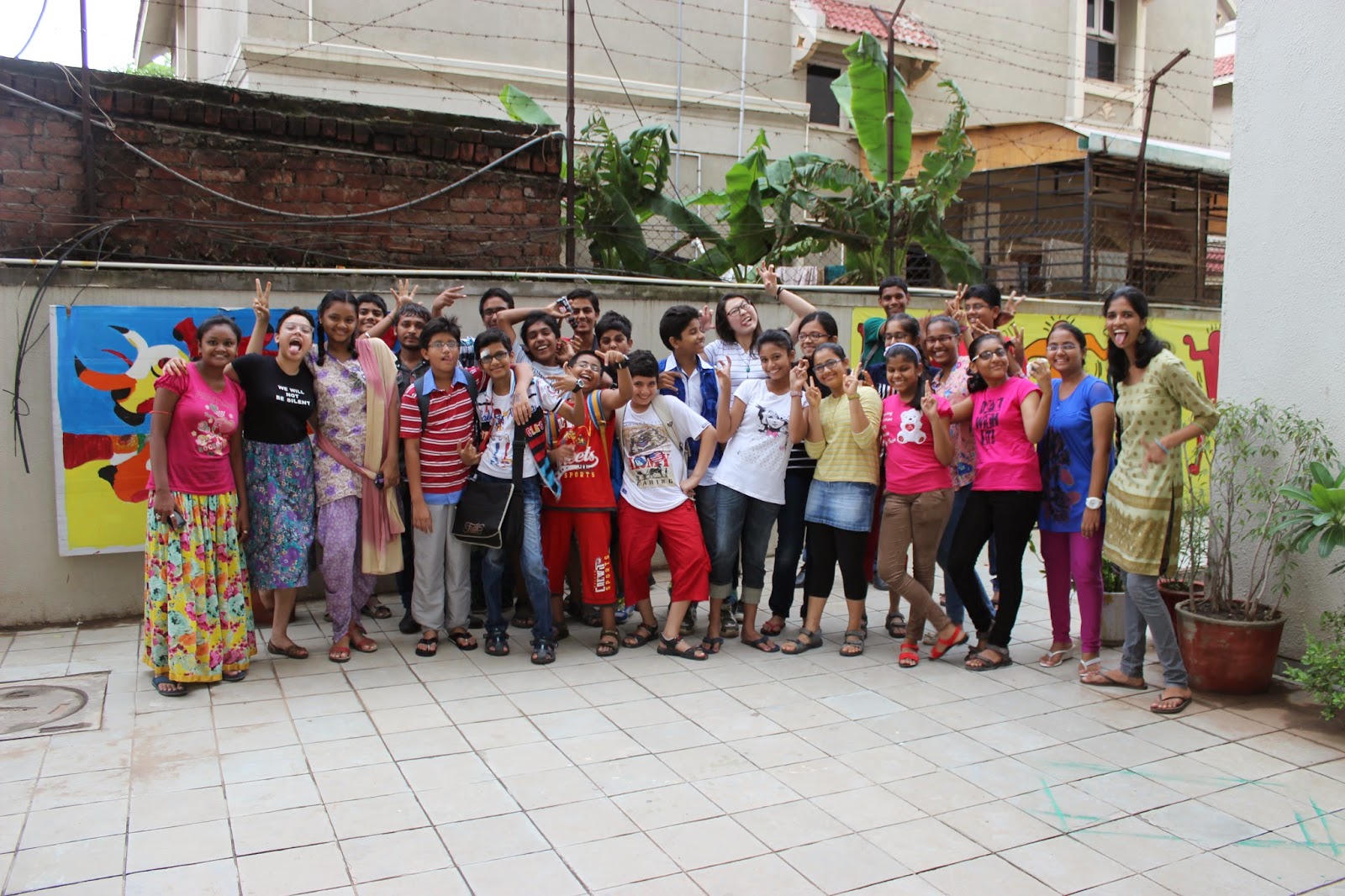 Beyond Black and White: Seeing Education in a New Light 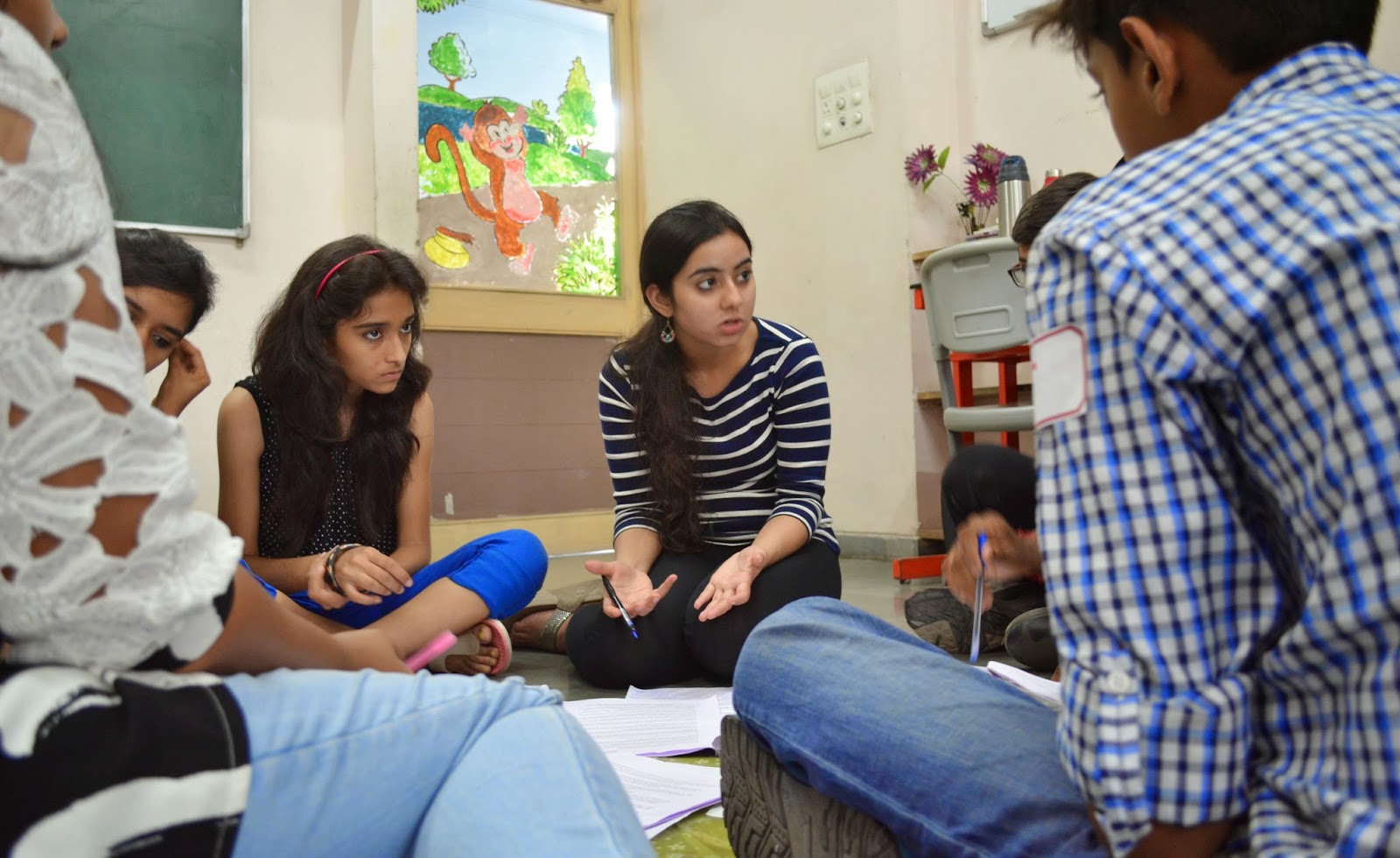 “But what is the right answer?” a workshop participant asked me. We were having a small-group discussion on possible ways to socio-economically uplift Dalit women, who are considered to be untouchable in the Indian caste system. A year back, I probably would have chosen the ‘best’ answer that had been offered during the discussion and urged students to think about why it was right. And if I were participating in the workshop, I might just have asked that question too.

But there needn’t always be the right answer, especially in the classroom. It took my first year at Swarthmore and my time at ITSA to realize this. At Swarthmore, my courses challenged me to think in new ways, although it was not until ITSA that I became more aware of how my college experience has changed my expectations and assumptions about classroom discussions, activities, questions, and more. My interactions with workshop participants have not only been revealing my expectations, but also reflective of their origins. This has helped me understand how I have evolved as student and how I can improve my facilitation skills during ITSA workshops.

I studied in a school that followed a similar curriculum to the ITSA workshop participants, the CBSE  Indian curriculum Although the CBSE demanded a lot of hard work, it did not necessitate students to critically engage with the syllabi to thrive academically. The need to know what is “right,” and perhaps more importantly, to be able to exclude what is not “right” is something I can easily relate to. Right. Wrong. Black. White. That’s not how social issues spring up. That’s not how they are solved.

I had known that one of the reasons ITSA had been founded was because of the lack of emphasis on critical thinking skills in most Indian classrooms. It was only in the past few weeks that I understood this reason.

There’s a reason this organization is called ITSA and not SAIT, and it’s more than just verbal aesthetics. It is no coincidence that “independent thought” comes before “social action." Whatever social action we try to inspire and foster in our workshop participants is subordinate to independent thought. When we talk about “igniting the flame of social change,” there is no question that that flame is located squarely in the human mind.

And in our experience, the best way to foster independent thought is through an egalitarian classroom environment.

We create this environment in many ways – student-generated safe space rules, equitable facilitation, flexible and tailored curricula. The most salient of these, however, is the physical arrangement of the classroom. At ITSA, we recognize that the battle (for lack of a better word) between traditional and progressive education is fought largely over the physicality of the classroom. Indeed, the physical classroom environment has, in many ways, been the line along which the traditional/progressive split has occurred. As far back as 1938, John Dewey warned that “the fixed arrangements of the typical traditional schoolroom […] put a great restriction upon intellectual and moral freedom.”

Realizing the correspondence between mental and physical states is what prompts us to discard the traditional schoolroom in favor of the discussion circle. So great is our aversion to traditional schooling that even the chair, an otherwise harmless piece of furniture, is discarded. Our workshops occur largely on the floor – not out of some misguided radicalism, but simply because the pull of years of traditional education is so strong that we must differentiate ourselves from it as fully as practically possible. Only this way can truly new ways of thought occur in both us and the participants.

You might think that one or two workshops conducted in this way might be enough to shake off the reflexive impulse to fall back into traditional modes of schooling and learning. But experience has shown otherwise – most starkly during our July 18 workshop. We had just conducted an activity that required chairs – one of very few such activities, and were having a discussion afterwards. The activity itself had gone very well – students had had productive group discussions and, as always, raised some very good points. For the discussion, we thought it would be too cumbersome to go back to our circle just to make a few comments, so we stayed in the arrangement we had been in during the activity.

As it happened by the end of the activity most of the chairs were turned in the direction of the board, where a workshop leader was writing down what students were saying. It seems that his superficial resemblance to the traditional classroom was enough to re-ignite the habits of traditional learning in full force. We began our discussion, and students did something they had never done before – they stood up to speak, they faced and spoke to the “teacher," often even when responding to points others had made. It was but a short discussion, and we soon switched back to the circular arrangement, but it was a stark reminder of the mammoth deterministic power of the physical classroom.

A few unfortunately arranged chairs, a workshop leader, and a board had threatened the fundamental structure of the ITSA classroom.
Posted by ITSA team at 00:37 No comments: